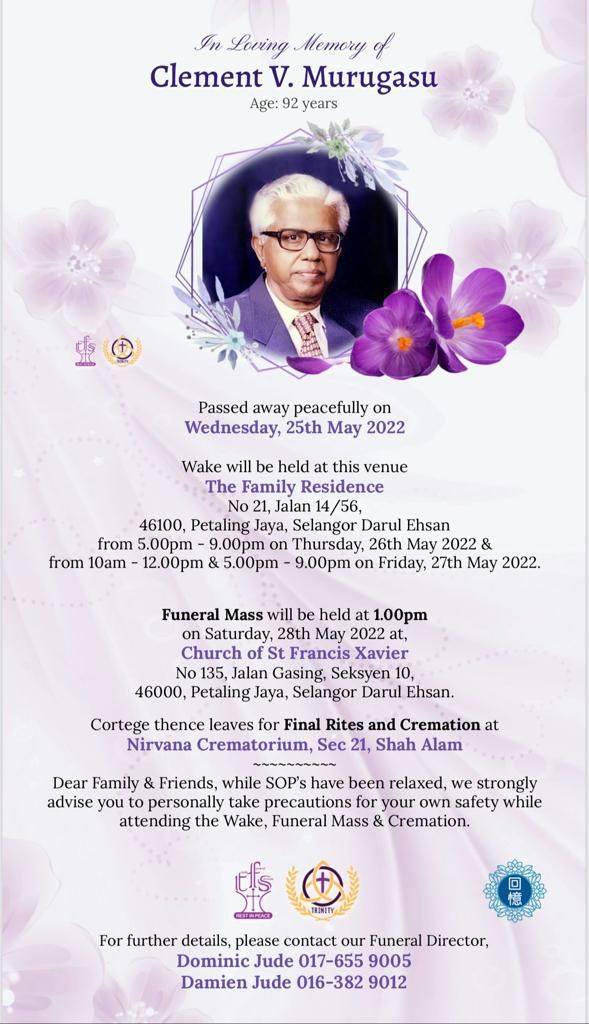 Sad news to report that our beloved VI Headmaster Mr. Murugasu passed away this afternoon at 3 pm. Details of funeral will be announced in the newspaper. Mr Murugasu was the first Asian Headmaster of the VI, serving from 1964-1969.

VIOBA offers condolences to the family of the dearly departed.

Victoria Institution
And Mr Murugasu
Are inseparable!
A twin, a soul mate that go hand in hand.
1964 was the year where we and Mr Murugasu stepped onto the grounds of VI .
A Malaysian headmaster ,unheard of in an elite British school ,a name in honour of its Queen Victoria.
A new era had arrived and this coincided with Muragasu appointment.
Traits of excellence were instilled— Academic,sports,leadership,discipline and hard working.
Nothing escaped his keen eyes—- grass was sacrosanct, no symbols of class and privilege with everyone wearing the plain white Fung Keong shoes,
No long hair ,an indication of decadence.
We strived and we tried as every red D
invited a spank
With no one spared!
Many regarded this
Punishment as part of growing up and a necessary
Discipline,but a few were traumatised.
We were told either
We become the best or not at all.
Deep inside us, we knew that outside the fierce front,we
Understood his strong desire for all His ” children” to be a Victorian every parents would be proud of— himself a parent too.
We,class of 1964 to 1970 was fortunate you came to grace our 2008 reunion dinner at RSGC.
A souvenir booklet with a welcoming message by vice captain, ‘Sarge’.
You were present and signed it too,
And now a priceless souvenir.
Coincidentally, the Malaysian Post Office in 2008
Commemorated a 1st day cover of 4 of the best schools
In Malaysia ,and VI
was among the four.
Again this 1st day cover was signed by you and our school captain,Hung Tat.
We bid you farewell
But your words and
Deeds are never forgotten as both the spirit of VI and
You live within us
Till the day we too
Meet you again and
Our Maker.